This Saturday in Tel Aviv was an idle one.  I’ve been in a funk all week and I’ve spent my Shabbat accordingly: on the couch, reading the news and refreshing Facebook…all day long (we are all entitled to wasted days and thoughts once in a while).  And with each hour, more and more posts and headlines began to surface on the inevitable – tomorrow’s ten year anniversary of 9/11.

Someone had posted First Lady’s Michelle Obama address to the American people, where she marked September 11 as a national day to honor civil servants and community leaders.  Volunteering, fundraising, activism…this is such the unique fabric of American society.

Having been extremely critical of myself in these past few days (it’s the funk talking), I couldn’t help but to scrutinize my own record of “giving back” to the country I’m most grateful to.  And unfortunately, there’s nothing to boast about.

America, I regret that I didn’t always show you my fullest appreciation. 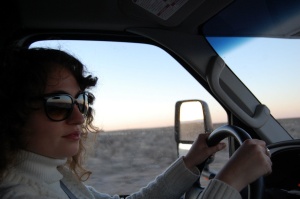 Tonight, I remembered my epic road trip across the States…a good-bye present to  myself prior to making Aliyah.  Alongside two Israelis, all three of us stared out our trailer windows in awe from America’s vastness and geography.  One minute we rode through the jet heat of Death Valley and the next, through a white-out in the Rocky Mountains.  We bought heirloom tomatoes from an old Confederate farmer and tipped the genius street dancers of New Orleans.  Outside the realm of rebellious San Francisco, where patriotism is often deemed as unsexy, this trip allowed me for the first time to simmer in deep American pride.

Tonight, I also thought about how the extent of my “giving back” in the States was limited to the Jewish community.  Admittedly, living in the defensive diaspora, I chose my activities and issues narrowly.  But what if I was as open minded to a wider range of events, causes, or even people in America as I’ve been forced to be here in Israel in pursuit of finding new friends and niche?  Perhaps I would have been more available for the greater America, for the greater joy and presence I feel here in Israel.

In actuality, the answers are less critical now.  But in continuing to ask ourselves these questions and drive lessons a decade after this tragedy, the memory of 9/11 clearly lives on.

America, you are an extraordinary country, and though we can all be better citizens (and leaders), my gratitude to you is boundless.

A collage of photographs of almost 3,000 victims, nearly all of those who were killed during the terrorist attacks on September 11, 2001.  See all photos here.