Two weeks in Spain – Barcelona, Granada, Seville, Cardoba, and Madrid – and so many varying impressions.  Where the Spaniard’s lack in their English, they make up in their savory jamón.  The economic crises is so painfully pronounced, but the scenery, architecture, and history is as rich as their gaudy cathedrals.

However, the most striking observation was the people…and not at all the Spaniards at large, but their elderly…the senior citizens…the abuelitos!! 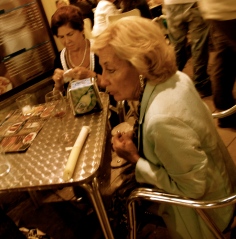 Now why the hell would I write about Spain’s old folks?  Because, if it’s charm and finesse that we’re seeking in a Euro-city vacation, the Spanish grandparents embody both.  More than the Gothic narrow streets or an over-priced cappuccino on the plaza, the elderly there scream class, tradition, joie de vivre, and dare I say, spiciness. 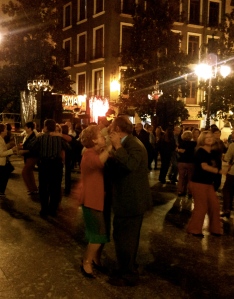 Strictly referring to the 75+ crowd, my mother and I gazed (in heartwarming envy) at the men twirling their ladies at a street concert.  Groups of women sipped beers way passed bedtime at a “girls night out.” The Franco generation may very well be popping pills by now for blood pressure, arthritis, constipation, or impotency, but they all dress to kill! High heels, tailored suits, caps, accessories, paired hand bags, salon hairdos, a barber-shave…all seem like protocols for a mere public appearance.  And most of all, not a single woman was left unaccompanied by her man’s graceful arm.

My mother, who’s a social worker at a predominately Russian-Jewish senior facility, half- jokingly noted a fundamental difference in mentalities between our old folks and that of Spain’s: “My guys are much more fatal…perhaps this way they’ll get more visits.”  Of course this is a gross generalization (I personally know quite of a few charmers there), but it’s true that for many, their morale has been tainted by WWII, Holocaust, Communism, and a difficult immigration late in their lives.  It’s not that the Spaniards were untouched by political traumas this past century, but the way they’ve managed to age so elegantly seems much more privileged.

So far, my generation is the most privileged in world history.  And I wish nothing more than to retain the Spanish zest in my golden years…fashionable, dancing, boozing, and strolling with my señor! 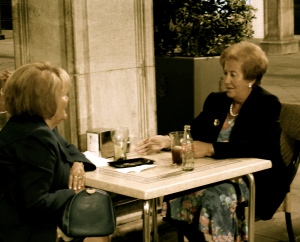 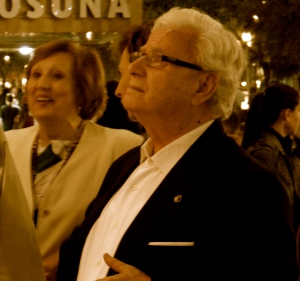 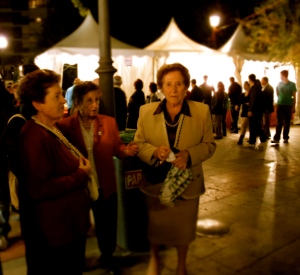 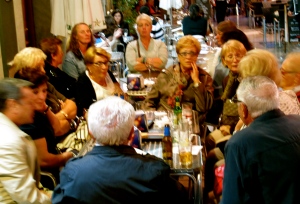